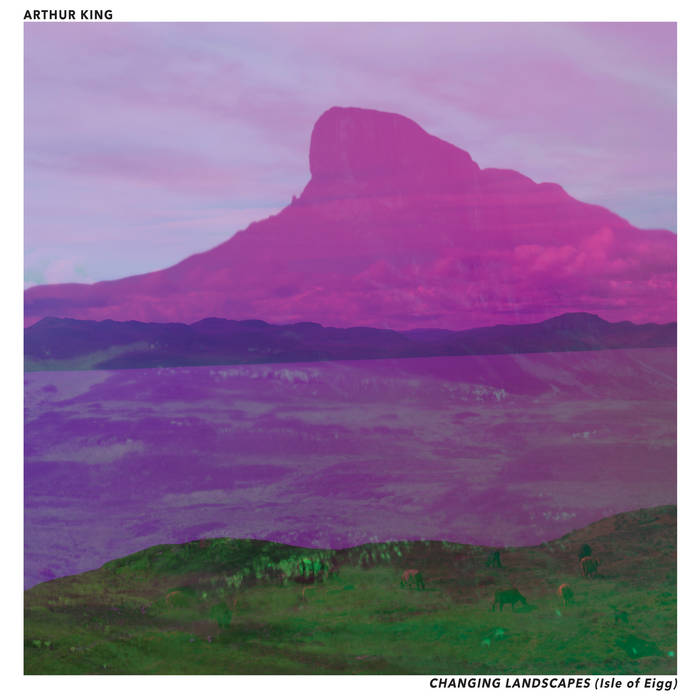 Arthur King’s Changing Landscapes series can be both distilled to and defined by two factors: the process, and the location. The process, or artistic methodology, is exactly the same wherever they go; it is the unchanging framework that allows the location to truly serve as the meat of the art. Because of this standardized framework, each project in the series has the location uniquely embedded into it. With its focus on field recordings, what comes from the process could literally not have happened anywhere else. The Scottish Isle of Eigg was no exception.

Jason Lytle (Grandaddy) was invited to be a part of the Howlin’ Fling festival on the island, and thought, “I’d rather not do this alone.” Enter his pals in Arthur King, and the invitation ballooned into spending a week as artists-in-residence on the island through the festival host Lost Map Records. The days began with exploring, field recording, and generally absorbing as much of the island as they could reach by foot, bicycle, and the occasional hitchhike. Throughout, the group collected a vast amount of audio and video source material. Along with video and photography, Arthur King recorded the sounds of sheep, wind turbines, streams, waves, the local pub, rain, and wind. These efforts documented souvenir shops, ferry landings, local commentary, tourist banter, electrical transformers, birds, cows, and everything in between that you might hear if you spend a week on a remote Scottish island. These collected artifacts were then input into the artists’ computers, to be sorted and edited for use in a live improvisational performance. The process was underway.

A performance defines the last stage in the process, and, besides serving as the recording session for the album, tends to be a celebration of sorts, of the artists’ time in the given space, of the minutes, hours, days, and nights of contemplation, and of the sights and sounds themselves. The performance brings the artists’ solitary, separate experiences together in a collective creative “exhale.” It happens, naturally, at a found space—a space with the conditions (or willingness) to host a live audio/video exposition, with amps and speakers, samplers, drum machines, electronics, horns, and other traditional instruments, as well as various video manipulation hardware and software. At the center of it all, is a powerful video projector in order to fully immerse the given environment in a moving interpretation of itself. On this night, the performance happened at our new friend Ailidh’s nineteenth-century home nestled on the far side of the island, in the Bay of Laig. And as could be expected, it was raining.

The performance generally starts off simply; a single image, a lone field recording, before quickly escalating. As one recording interacts with another, a rhythm may emerge, a melody revealed. And so the conversation begins, as a keyboard or guitar might offer a note in response. Electronic sounds meld with sounds from the natural world. Soon, the group manifests a sensory feeding frenzy of sounds and images, and to witness this is to be immersed. It is a real-time, creative, lucid dream. It is many separate moments dancing together, creating new relationships, and leaving you with an understanding, a respect, an admiration, and yet…a deepened curiosity of the part of the natural world that, in this case, is the Isle of Eigg.

The album opens with a shimmering tremolo synth pad as a medley of field recordings weave in and out. Half-intelligible conversations, a vague rustling, wind, a rooster's cawing. The pulsing thud of a kick drum slowly creeps in like a heartbeat. The song culminates in a swirl of drum machine and guitar feedback before dissipating into the quiet, plaintive musings of a small church piano. Raindrops fall on the roof overhead. This musical composite introduces the remote sonic landscape of Eigg. This palette reaches climactic heights in the album's opus "Eigg Electric," a fever pitch of industrial electronic percussion, synthetic drones, and crashing waves. The journey reaches its conclusion in "St. Franny's," where an elegiac string synth procession commences as birds chirp and sheep bah in the distance. The album closes with the reverberant trail of a lone dove’s call.

But wait…there’s more. Changing Landscapes (Isle of Eigg) is not only an audio LP and a short experimental art film/documentary. It is coming alive physically, sensationally, as an immersive art installation in a pop-up gallery space in Los Angeles. Participants will enter a spatial interpretation of Eigg, and of Arthur King’s creative process, complete with sights, sounds, and smells. Depending upon their timing and position throughout the space itself, users will find their own unique lucid dream experience through an amorphous soundscape and visual field, brought to life through sculpture, projected video, and amplified audio—the latter two derived from the original source material.

Bandcamp Daily  your guide to the world of Bandcamp